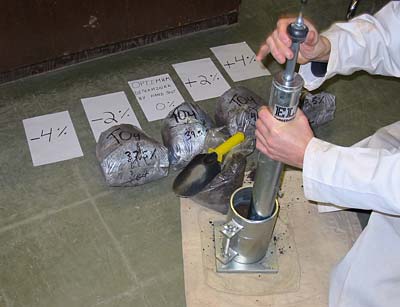 A set of soil samples with varying water contents have been prepared for the Proctor test. The rammer is being used to compact a sample that is in the mold. Photo by Lesley Dampier, Vancouver, BC

The method you choose for a soil bulk density determination depends on the site characteristics. Two commonly used methods are: (1) the core method (2) the excavation method.

The core method is used when coarse fragments (particles with diameter > 2 mm) occupy less than 25% by volume. At sites with lots of coarse particles and/or tree roots, the core method is difficult to use and the excavation method is recommended.

A double-cylinder, drop-hammer sampler with a core is designed to remove a cylindrical core of soil. The sampler head contains an inner cylinder and is driven into the soil with blows from a drop hammer. The inner cylinder containing an undisturbed soil core is then removed and trimmed to the end with a knife to yield a core whose volume can easily be calculated from its length and diameter. The weight of this soil core is then determined after drying in an oven at 105°C for about 18-24 hours.

The excavation method was developed by soil engineers who needed a method suitable for use in gravelly soil. This method is used when coarse fragment content exceeds 25% by volume. At forested sites this is usually the preferred method for soil bulk density determination. 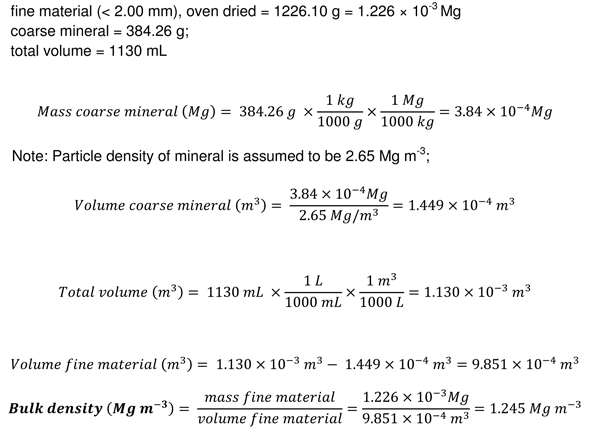 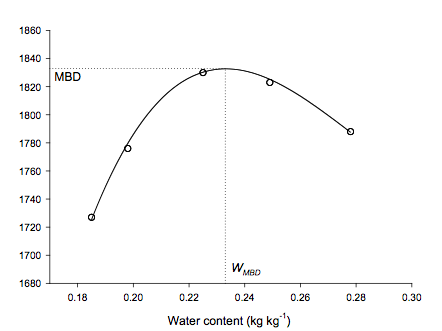 Measuring the changes in bulk density of the same soil, before and after application of compactive force, depicts soil compaction. However, the use of bulk density is limited when comparing compaction levels among soils that vary in mineralogy, organic matter content, texture, and in situ soil conditions. Efforts have been made to identify soil parameters that integrate several soil properties and relate them to plant growth. One such approach involves expressing the actual bulk density as a percentage of some reference compaction state. Relative bulk density (RBD) is a parameter that is calculated in this manner, using maximum bulk density as a reference state.

Maximum bulk density (MBD) is a good choice for the reference compaction state used to calculate RBD because it is determined by a rigorously defined method (i.e., Proctor compaction test) and can be readily done using standard testing equipment.

Relative bulk density (RBD) is calculated by dividing the actual (or field) bulk density by MBD. Relative bulk density has been shown to be a useful index to assess soil compaction on agricultural and forest soils. For example, an RBD of 0.74-0.81 has been associated with optimal crop production regardless of soil texture and organic matter content; an RBD of 80% is considered to be the threshold limiting tree growth.

THIS IS A CALL TO ACTION AREA

This is just an example shown for the theme preview. You can add text widgets here to put whatever you'd like.